Following graduation from Dallas Seminary in 1986, Stephen and his wife Marsha moved with their infant twin sons to Cary, North Carolina, to plant Colonial Baptist Church (colonial.org). Committed to the exposition of Scripture and the doctrines of grace, the church plant grew to include several thousand households. In September of 2020, Stephen reached 34 years of faithful ministry as the pastor/teacher of this wonderful ministry and church family.

In addition to his pastorate, Stephen serves as the president of Shepherds Theological Seminary. Shepherds has earned full membership status with ATS and enjoys a growing student body, taught by an outstanding faculty. Shepherds currently meets on the beautiful campus of Colonial where Stephen enjoys interacting with the students, as well as teaching regularly in the pastoral theology department.

Wisdom for the Heart Resources (view and order here) 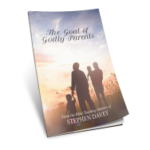